It’s a scenario unique to the online social networking frontiers of modern life. Last spring, three young owners of  The Singing Bowl Café, a popular Erie vegetarian restaurant, found themselves suddenly without a place of business.

“People really liked the food and the restaurant, but we were stretched pretty thin and didn’t know how we’d be able to open up a whole new place,” says chef Jessica Mueller, who opened the Singing Bowl with her husband Erik and friend Ashley, all long-time committed vegetarians.   “It didn’t seem likely.”

Normally that would be the end of the story. Restaurants open and close all the time. But not necessarily so in these days of Facebook. The restaurant had grown a 2000+ “friend” following on their Facebook page and after the closing in March 2010, the postings and comments offering support and suggestions for new locations flooded the pages.

A mutual friend brought the massive Facebook support of the Singing Bowl to the attention of Mary Bellucci, an Edinboro entrepreneur with a food service background.  “We were impressed by the reviews they had gotten when they were open as well as their online supporters and their energy level,” said Bellucci, whose husband John has owned and run John’s Wildwood Pizzeria in Edinboro for 31 years. “But we didn’t know them or how to get in touch with them other than through Facebook.”

Mary took a leap of faith and reached out to one of the owners through Facebook. A conversation ensued and 5 months later, The Singing Bowl Café has new co-owners, a business plan, a new location and a revamped menu.

Enter BOOM. We were tasked to revamp the branding, create collateral, print and web advertising for the restaurant, and plan and manage a press tasting event. Excitement and anticipation were in full force at the relaunch press tasting party on October 20th at the new 103 Meadville St. location in Edinboro. BOOM was in the house, sampling some amazing food, managing questions from the local press, and assisting with the event. 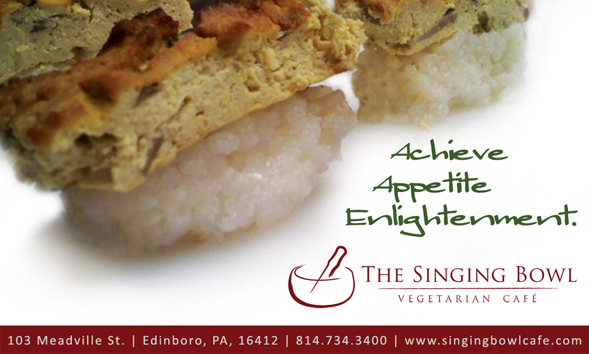 Excited to share this TV PSA we directed, shot and produced for Fayette County's Effective Prevention in Connellsville Communities "Falcons for Families" program. Thanks to Mark Spaeder for his wonderful storytelling vision, as well as all the parents and kids who volunteered to be in this spot. (Agency Version) ... See MoreSee Less